Home Others Safeguards for Smooth Generation of E-invoice From TallyPrime

Safeguards for Smooth Generation of E-invoice From TallyPrime

In its commitment to bring transparency and digitization in the entire nation, Government has published norms for generating E-invoice i.e. In simple terms Invoice whose details are authenticated by the GSTN is called E-invoice.

In E-invoicing all B2B Invoices, generated by specified suppliers, needs to be registered with the government portal i.e. Invoice Registration Portal (IRP).  After Authentication the IRP shall issue a 64-digit unique IRN (Invoice Reference No) which has to be converted in QR Code. For a valid E-invoice, QR code needs to be printed on the face of the invoice.

As can be seen from above, the process involves sharing of critical data with government on near live basis. Moreover, the same information is used by multiple agencies like E-waybill, Income Tax Authorities, Auditors etc. It is also pertinent to note that the Government is relying more and more on data analytics to identify the defaulters or misusers of the system. Any cancellation / mismatch with actuals can involve legal challenges in future.

How to Generate E-invoice

The detailed process of generating E-invoice is available in the following links:-

This article is an attempt to provide a shield of knowledge on common errors that users make while generating the E-invoice and help avoid them.

The numbering requirements for Tax Invoice are stringent, while most common of them is that the Invoice number should not be more than 16. There are more configurations that have to be taken care of:

IRP portal generates the IRN number based on the voucher number at the time of generating E-invoice. Any change in numbering thereafter would create problem in reconciling with GSTR1 and Tally would also show error in mismatch in QR Code.

Safeguard-2 Selection of State and updation of Pin code

TallyPrime allows selection of state in which goods have been sold at multiple levels, users should ensure that state information is updated at various levels. Pincode must be 6 digit without space i.e.400034

While generating E-invoice for Export sales, when the invoice is in foreign currency, Updating of ISO Currency Code as below 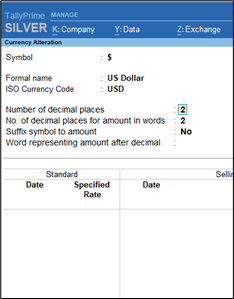 There may be situations where the IRN is generated for a particular voucher, but you might have to cancel it. As per GSTN department, invoice cancellation has to be done within 24 hours of IRN generation. One must first select Cancel IRN and then Update Cancellation and then confirm the reason for cancellation >> Connect with GSTN >>Cancel the IRN on the Portal >> In Tally Also Cancel the Einvoice by Clicking Alt+X. The detailed process for cancelling einvoice is referred here https://tallysolutions.com/gst/how-to-cancel-e-invoice-in-gst/ .

Some users follow marking for cancellation, without going through the next steps and this can create problems such as mismatch of accounting data with IRP data, Further, GSTR1 is auto-populated from the e-invoice information and thus total sales would be inflated for that month.

So, what if 24 Hours are over, can E-invoice not be cancelled?

In such situation it is better to raise a credit note for the sales invoice generated and New Invoice should be generated for the transaction. One must ensure that the NEW invoice number is not the same as old number.

During the process of E-invoice, information on HSN Code is flowing from the books of accounts to the GSTN Portal. In TallyPrime users can provide for HSN codes at multiple levels i.e. Ledger, Group, Item, etc. In case of conflict by which users have mentioned different HSN Codes at different level then there is an inherent hierarchy by which the TallyPrime sends the HSN Code data to the Portal.

Currently the hierarchy is as mentioned below:

Thus, if the HSN information is provided at the 1st Level i.e. Transaction, then any conflicting information below would not be considered while posting the E-invoice.

How to provide for Multiple HSN for same ledger account at Transaction levels:

Let’s take an example of Interest to be charged for delayed payment for which E-invoice is generated. The HSN Code has to be as per the Item HSN of the transaction for which Payment is delayed. There cannot be multiple ledger accounts for each type of item for which delayed payment is charged. To ensure smooth working in this we can use “GST Classification”

While posting the transaction while you have selected Interest Ledger, ensure you are able to select GST Tax Rate Details after selection of credit ledger (If not visible, then enable – Show GST Classification from F12 config option) which can help you to select the GST Classification as mentioned in the above steps.

To list out all common errors one may also refer https://help.tallysolutions.com/tally-prime/gst-regular-sales/e-invoice-faq/

START A BUSINESS IN UAE

The UAE comprises of 7 Emirates - Abu Dhabi (which is the capital), Dubai, Ras Al Khaimah, Sharjah, Ajman, Fujairah & Umm Al Quwain. Each of these Emirates is ruled by its Sheikh & the Sheikhs

SC Allowed Service of Notices/Summons/ Document Via Whatsapp, Telegram in Addition to E-Mail

Section 135 of Companies Act, 2013 (Act) prescribes Corporate Social Responsibility (CSR) as a statutory obligation for companies along with specifications and procedures to be followed