Work from Home is a new format of working, being need-of-hour rather than an option. Pre COVID, this was an option given by majority organisations only in case of emergencies or un-avoidable circumstances which requires working even when person is out of office. But post-COVID, scenario has changed.

Various options of Work-From-Home setup for office are discussed in article to use Tally remotely.

Majority organisations have traditional setup where Tally runs on some PC. User working from the office accesses Tally via LAN. Remote users connect to it via Remote Access.  This setup is very easy, but suffers a few disadvantages as below:

In today’s WFH scenario where employees are working from their homes, complete office’s operations come to standstill due to these problems, which are beyond our control. Alternate internet connection and UPS/Inverter can solve this, but both incurs cost and require installation. Not every business might afford this, as this setup cost increases with employee count.

Tally on Cloud based Windows Server

Windows Server is a popular choice of OS with facility of multiple user logins. Many SMEs have machine on data centre with Windows Server installed on it, so that users can login to their account using Remote Desktop & keep their working files on server itself. With Tally Virtual User (TVU) service, organisation now-a-days install Tally on that server itself so that users can operate Tally by directly connecting via Remote Desktop. This setup is robust, but suffers few limitations as below:

This setup is affordable for an MSME, but certainly not for a small business organisation. Such a huge outlay of fund on technology might erode profits of organisation. Purchase of this setup just for few months of WFH scenario might prove as a burden on the organisation.

Tally on Cloud based Linux Desktop:

Linux is not an operating system, but just a kernel. Kernel is the core part of any operating system which powers OS. Linux based OS is found everywhere, including Android OS found in our Smartphone. Today many Linux powered operating systems are available like (popular ones)

etc known as distros of Linux. Linux based OS generally comes in 2 flavours:

Server is a light-weight option with minimal features, but is difficult to manage, as it can operated through commands only, which requires technical knowledge. Desktop is a GUI (Graphical User Interface) option of OS, which can be operated through mouse like Windows.

Tally is developed for Windows platform. Windows based software cannot run on Linux based OS. A pseudo-emulator named WINE is available, which can run Windows based software in Linux, very smoothly. Since Tally’s core functionality is programmed in C language, WINE runs Tally even more smoothly in Linux (screenshot attached) 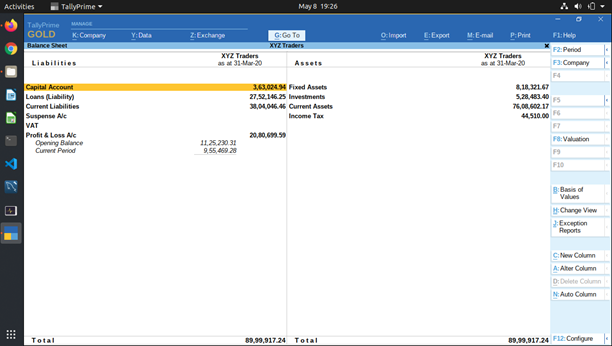 Hiring Linux VPS (Virtual Private Server) online is no big deal in today’s era. Many of the cloud-based VPS service providers offer these with starting price as low as $5 as month with minimal configuration. Any Linux server (command-based) can be converted to Linux Desktop in just few minutes by running commands to install GUI packages to it. Post converting it to Linux Desktop, it is easy to install and run Tally on it. One can easily access it via Remote Desktop & make those companies of Tally required for remote access online.

There are many advantages of having this setup as below:

VPS data centre offers both Windows & Linux based OS Virtual Machine. Any decent setup, be it Windows or Linux Desktop, requires at least 8 GB of RAM and 200 GB of hard disk, to run Tally smoothly. For better understanding, a comparison of both these options (matching the above listed setup configuration) is given below:

(this comparative chart is made based on prices of various plans of Windows / Linux available on website https://vpsserver.com at the time of writing this article. Author does not endorse this VPS service company & referenced it just because he found it to be a competitively priced websites offering VPS for both Windows/Linux. Users are expected to do their own study)

Cost to benefit, is the measure for weighing any option. Every option comes with pros-cons, subjective to the organisation’s size, employee count, nature of work, security of data, etc. WFH ultimately is a temporary scenario for majority of organisations, barring few exceptions like IT industry which too needs physical presence for some functions. Every cloud has a silver lining. This pandemic has for sure shown us a new & innovative way of doing the same business. VPS is the next way of maintaining our IT systems, being a paradigm shift towards hiring against purchasing.

SC Allowed Service of Notices/Summons/ Document Via Whatsapp, Telegram in Addition to E-Mail

Safeguards for Smooth Generation of E-invoice From TallyPrime

In its commitment to bring transparency and digitization in the entire nation, Government has published norms for generating E-invoice i.e. In simple terms Invoice whose details are authenticated

Section 135 of Companies Act, 2013 (Act) prescribes Corporate Social Responsibility (CSR) as a statutory obligation for companies along with specifications and procedures to be followed

An Introduction to Blockchain Technology & Cryptocurrency

A new technology is redefining the way we interact. If that sounds incredibly far-fetched, that is because it is. It combines the openness of the Internet and the security of Cryptography. It will cha